Thai-riffic! is my first cHEwY creation (book) and was published in June 2010. It is an uplifting and refreshing story about a kid who have their origins and traditions in a place so remote from the kids’ imagination. It’s for anyone trying to make sense of their own family heritage. Anyone caught between two cultures. Anyone wanting to fit in and being treated for who you really are.

So what’s this story about?

Have you ever had an embarrassing family?

Maybe your parents have weird jobs that they can’t stop talking about.

Or maybe your parents do crazy things in front of your friends.

Lengy has that problem and more.

He’s a Thai kid who’s sick of being Thai.

(You would too, if you were having Thai food every single night!) 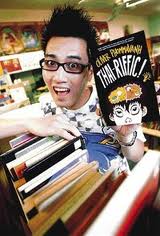 He wants to keep his background a secret…which is hard to do when his parents are around.

They own a Thai restaurant called THAI-RIFFIC! and want the whole world to eat there…

So just when he’s about to start high school, his parents have this crazy idea to bring more customers to their restaurant.

An idea that includes embarrassing Lengy to new extremes!

He’ll need his new friends and a wacky teacher to help him come up with his own crazy plans…for a normal life. And a slice of cheesy pizza!

So, how do you stop your parents invading your life?

Check out this review from the Boomerang Books blog.

This is the story of my life…sorta.

Even though my parents never owned a Thai restaurant in real life, they were great Thai cooks and I did really love takeaway food (and still do hohoho).

I wanted to be known as an Aussie kid, instead just an Asian or Thai kid and do Aussie things like eat meat pies and play cricket haha. So a lot of my embarrassment and shame rings true in Thai-riffic!

I also used myself in real life to be another character, Mr Winfree. He really is me as a primary school teacher back in the good ol days, wacky and weird, with a whole lot of toys. In fact, the original title for Thai-riffic! was supposed to be called GROW UP SIR where Lengy faces off against Mr Winfree as rivals to run the classroom. In the end, I thought Lengy had a better background story to tell hehe.

You can check out the Penguin Teachers Notes here.

There is also a dramatic unit about the Thai-riffic! stage adaptation here.

For PETAA (Primary Education Teachers Association Australia) members, there is a unit of work based on Thai-riffic here.

The CopyRight Agency will be developing a fresh unit of work for Thai-riffic! as part of the Reading Australia’s resource list. This will be released in 2021.