Super Con-nerd is the seventh cHEwY creation and came out in June 2017! It is the loooong awaited sequel to Con-nerd and focuses on Connor going to selective school, where he meets new friends (and rivals) and tries to survive in a place where everyone is a NERD.

What is Super Con-nerd all about?

Connor makes it into a selective school but he’s the only one from his old primary school. In fact, all of his old friends have scattered to different high schools. Connor used to be the smartest kid at his old school. Now he is one of many nerds there, including Super Nerds like Andrew. Can Connor survive his new high school and find a way to become a Super Con-nerd? Can he still be friends with old primary school mates? Or have things changed forever?

Why did I write this story?

Well, let’s do this with an interview with myself hohoho

Did you always wanted a write a sequel for Con-nerd?

Con-nerd was the most requested book I’ve had for a sequel. cHEwY gum gums would ask me, ‘will there ever be a part 2 of Con-nerd?’

I was happy with the ending of Con-nerd, but the door’s always open for a sequel. The thing is, would people still want a sequel after all these years? There have been disappointing sequels to movies and books that shouldn’t have been made (Zoolander 2, I’m looking at you).

But then I got an seed of an idea…how would it feel to make it to a selective school and realise you’re not as smart as everyone else? I mean, not everyone can come first, right?

Then I had another dilemma for Connor, could he still stay in touch with his old primary school friends, even if everyone’s in different schools? It happened to me, I was all by myself in my high school, and it was tough to still see my old primary school buddies. 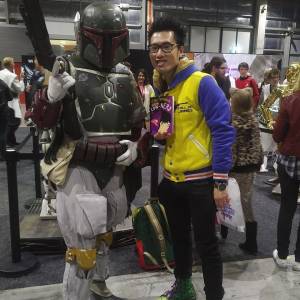 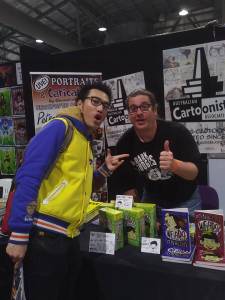 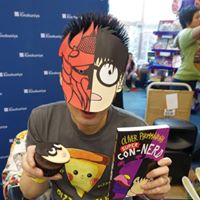 What inspired you this time around?

Firstly, I liked the idea of Connor’s old friends, Original C gang going up against his new high school pals, the Nerdy Rejects. I had that ‘Capital America 3: Civil War’ poster or ‘The Bizarro Seinfeld gang’ (google that up haha) in my head. I mean, we may have friends in different groups or circles, but would they actually get along if they were altogether? I tried to stay in touch with my primary school friends but by Year 9, we just drifted apart. It’s a huge deal for kids as they enter high school, will some friends get left behind?

I also wanted to have a Comic Book Convention in this story, so Connor goes to Cosmic Smash, where he has a chance to meet some cool cartoonists, and support his new friend in a Cosplay competition. Now the character Vinh was inspired by a friend, who is a mad cosplayer. I interviewed him about what it takes to be a cosplayer (it’s more than just wearing the costume, making it is just as important).

I’d imagine that Connor would freak if he met cool cartoonists like the talented Jules Faber (who illustrates the WeirDo books as well as own series, Crack Up).

You have a ‘super’ theme happening in this story. Why did you name your sequel Super Con-nerd?

That’s easy! Because I love Nintendo. The first Nintendo console is called NES and its sequel was Super NES. I also love Sonic and DragonBall Z, which has characters upgrading to the next level with Super Sonic and Super Saiyans. So I’m fascinated to see this in the school setting. Connor thinks he’s a nerd but he realises that there are better, smarter kids in his new high school. Squire aka Andrew is a super-nerd and he knows it too. Connor wonders what he can do to be ‘super.’

It also all adds to the Superhero themes too.

Will there be a third Con-nerd novel?

Never say never! If it does happen, it’ll be called Con-nerd 64 haha

If you have any other questions, please contact me OR follow me on Instagram/Twitter at @oliverwinfree and ask me there!