Natural Born Loser has been a passion project of mine. I started writing this story called Nobody’s Prefect, about a bunch of prefects at a rundown and rough school. It was a reflection of my experience at high school. I became a prefect in Grade Eleven, after an exodus of brighter students in Grade Ten. I kept thinking that I was only picked because there was no one else. 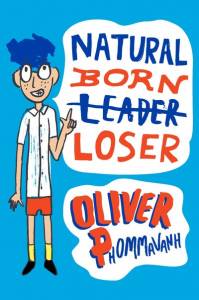 This feeling lingers with Raymond, when he gets picked for prefect at Barryjong Primary school. Everybody makes fun of his school, they think it’s a training ground for feral kids and bullies. All of my books have plenty of scenes at school, but this is one story where the school itself is a main character too. As a relief teacher, I’ve taught at schools like Barryjong, where they have a reputation for being a notorious place and school morale is at an all-time low.

However, there are so many good kids in schools like Barryjong. Kids who stay out of trouble like Raymond. Bright kids who feel like rats on a sinking ship, like Randa. I’ve been back to some of those tough schools as a teacher and author, and have seen how a few positive changes can help turn the school’s morale around. So that’s when I wanted to write how this might happen to Raymond and his school.

Raymond’s reluctance to become a leader also echoes my own personal feelings. While I loved being a class clown, but who would follow me if I became a leader? I would feel so vulnerable. I know a lot of people who are natural born leaders, but can you learn to be one? It was something that I wanted to explore when I was writing this book.

Raymond: Raymond is a likeable guy who is happy to be in the background. His best friend is Zain. He likes playing soccer, but he’s not that good at it. Raymond has no idea why he was picked as a prefect, but its Raymond’s ‘normal-ness’ that makes him stand out. He is relatable to all the prefects and even acts as a referee to keep the tensions down among the other prefects.

Zain: Zain is Raymond’s best friend and dare buddy. Raymond and Zain share a love of soccer, but when Zain’s ambitions to become captain kick in, Raymond discovers another side to him. He’s based on a friend who would always try to dare me to do crazy things all the time at school (some of which are in the book).

Randa: Randa is one the brightest kids at Barryjong and she knows it too. She’s a master organiser but she can also be a little pushy and bossy too. Randa approaches her prefect role with vigour and plenty of ideas, but she has to learn to get along with others. The other prefects help Randa to lighten up.

Ally: Ally’s an artist and dancer. She is loosely inspired on a comedian friend, who is just as chirpy and positive as Ally. She feels a little weird because of her parents, who health freaks, but she fits in quite well with the other prefects.

Mr Humble: Mr Humble is probably one of my favourite characters. He is a jolly principal who gives the freedom for the prefects to own their decisions and fundraising ideas. He gets to know each of the prefects, in particular Raymond, who Mr Humble has picked for a special reason. I’ve worked with principals like Mr Humble, who are vibrant and hands-on. They really can change schools around.

Raymond’s Mum: I love having this idea of a child going to the same school as their parents, and even having the same teacher! Mrs Saxena is based on a real teacher I had back in high school, and she was old back then. Raymond’s Mum had ambitions to become a school captain when she was a kid, so her own journey to help out the school runs parallel to Raymond’s own efforts.

Confidence/belief: Raymond thinks he’s a natural born loser and is happy to be a follower. But when he’s dared to try out for prefect, he questions himself and wonders if he could actually be one.

Leadership and working as a team