The Other Christy is my sixth cHEwY creation (book), and came out in June 2016. It’s the story of two girls, Christy Ung and Christie Owens, who are total opposites in the same class. But then something happens, and the two supposed enemies find out that have more in common than just their name…

What’s this story about?

Christy Ung and Christie Owens have been in the same class for three years straight. Everybody calls Christy, the Other Christy, because the spotlight is always on Christie, who is more popular. What Christy really wants is a friend. She’s moved from Cambodia with her grandpa three years ago, and the only friend she’s ever made is a rabbit named Barbeque.

Christy thinks it’s because she gives off weird vibes. Her grandpa is ultra-clean, and she is forced to do things like eat food with cling wrap on her fingers or wipe clean everything she touches because it’s tradition. Her only joy comes when she bakes with her Auntie Mayly. Auntie Mayly suggests that she bakes something for her class, maybe she’ll make some friends…

And Christy does make a friend. She didn’t expect it to Christie herself.

Over the next few weeks, the two strike an unlikely friendship. But can you really be friends with your enemy? Can Christy trust Christie with her secrets, including why her grandpa is so clean…

I had the title, ‘The Other Christy’ since my days at uni haha. But that’s another tale for another day…

As for the story itself, I visited a school and saw two girls who were both named Sarah and Sara in one class. They were besties. It reminded me of my own experiences as a teacher, teaching kids who have the same name in class. How could you tell them apart? And what if they were friends? How would they become friends?

So Christy Ung popped into my head. I had the idea of her living with her grandpa. It was fun writing about Christy’s grandpa, who has his reasons of why he is so mega-clean. Christy’s grandpa is my favourite character, because he has some weird habits, and takes being clean way too far.

The baking part came from my wife. She’s a massive baker, and I’m a lucky duck to try all her tasty desserts. I help out a little, but most of my research came from eating haha.

One highlight was promoting the book on Kids WB where I was turned into a giant cupcake lol. 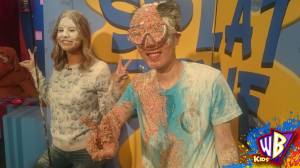 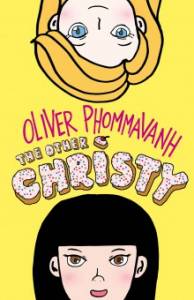