I had my first official author visit and workshop, 2 months before Thai-riffic! comes out. I became friends with Claire from the Gosford City Library network, and I was impressed with their bookclubs and themed parties. So, I drove up north to be part of their pirate party and run a school holiday workshop at Erina Library. I had a great bunch of guinea pigs who were keen writers and avid readers. I got to show them my writing methods, some of which were ‘borrowed’ from other authors but all helped me write Thai-riffic! I read a part of my book (shhhh, don’t tell anyone from Penguin haha) and that’s when it hit me-I’m actually a real author and I really love it! I got a few laughs too, perfect for the comedian side of me.

After the workshop, I dashed off to Kincumber Library for the pirate party. There was a cool turnout of kids decked in pirate costumes and clothes. I wore my pirate hat (thanks Nicole!) and watched the many activities planned by Claire and Co. They included games such as pin the parrot on the pirate. They also launched the travelling pants, a program that Gosford City Library came up with two years ago. Inspired by the Ann Brashares’ series, the jeans travel from library to library and get decorated and displayed. It’s a neat idea that’s been expanded all across NSW this year. The pirates got started with all sorts of pirate bling and pictures.

With lots of pizza and pirate cake, the kids all had a cheerio time. I wish they had something like this when I was a bookworm kid

I hope to be back in July for another visit, armed with my books and more tricks up my sleeve.

I am a kids author, teacher and stand-up comedian. I live in Sydney Australia and I’m an absolute burger fanatic. 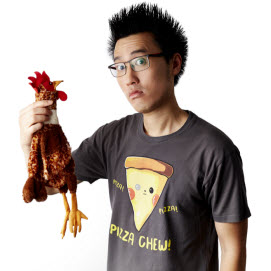 Hello there! I am a kids author, teacher and stand-up comedian. I live in Sydney Australia and I’m an absolute burger fanatic.

Once Upon A Festival in Adelaide